All of my sewing sisters will be guilty of stashing far more fabric than we know what to do with but since I’ve joined in with the wonderful world of the sewcialists I have had to concede that it’s not just fabrics that I have a huge unused pile of but there is also a veritable library of sewing patterns accumulated over the years. I am sure that just as with the fabrics I had a wistful look in my eye as I said to myself or the pattern in fact ‘One day your prince … I mean fabric will come’.

I have vowed to use the fabrics up (shhhhh I didn’t just buy loads while I was abroad) and I had a mission. This piece is the final item I made for my long trip abroad. This project turned into a double stash-bust whammy as not only was I going to be using fabric I had bought over two years ago, I was also going to use a beautiful pattern which has been languishing in a storage box for the best part of two decades.

Byron Lars is a designer I discovered via Vogue Patterns. He launched a number of patterns in the early to mid-1990s. His signature was unusually twisted and tucked and folded details in his patterns. I bought just this one but remember coveting several more. This pattern dates from 1995 according to Pattern Vault. I can’t be entirely sure when I bought it but considering my sewing went on the back burner when I went to university in 1997, this timeline would be about right.

Giddy with the excitement that being part of the sewcialist arena has filled me with, I got all ambitious and decided I needed to make a new wardrobe to take with me on my long trip. while I wasn’t going to get anywhere close to me-made every day I was pleased that I wore a few new items. After my semi-successful jeans and my glorious T-shirt, I was full of confidence.

Now don’t get too excited I’m actually making the trousers from this pattern, not the twist front top or tie front mini. I had some common sense, I knew those versions would need a lot more time than I had and I still feel a bit rusty in my skills.

The fabric came from @dittofabrics a couple of years ago. Now I used to be pretty much anti floral patterns of any description but now I quite like huge flower motifs and this design really appealed to me. I had trousers in my mind as soon as I saw it but I was thinking straight or skinny legs. This pattern is actually quite a wide tapered shape.

I was visiting my sister and took all of my sewing gear as well as my sewing machine. It was still a little awkward cutting out on her living room floor rather than my cutting table, however, it provided us with some entertainment as I did various contortions to try to get around the fabric without stomping on it. 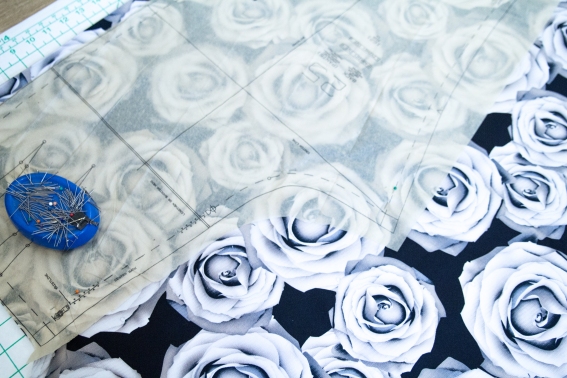 Once I had committed to the pattern and stopped daydreaming about the ’90s I was brought down to earth with a bang. Apparently, I’m not the same size as I was 20 years ago – who knew! This is a single size pattern and I am no longer that size. This meant I had to embark on some impromptu grading. Now I’m a skilled seamstress, even though I say so myself. However, I’m not yet a designer or pattern drafter. It’s one of my ambitions to learn how to make my own patterns but it hasn’t happened yet. Now I have to make these trousers two sizes bigger.

My default manoeuvre when I don’t know something is to reach for a book, (yes, books before Google) but I decided that this should be straightforward. Years of using paper patterns have shown me that most grading seems to involve adding a bit. It seems like about 1 cm per extra size. This is what I went with. The crotch seam needs a French curve but it went OK.

Technical bits are limited to a concealed zip which was a little stubborn and a waistband to apply a facing with under-stitching to keep it laying the right way so nothing too eventful. I even managed to do a blind hem with my overlocker for the first time.

Now as I said, I originally had skinny or straight legs in mind when I saw this fabric and having made it up, part of me still thought that way. However, I’m warming to the taper as it’s very flattering on a fuller figure. That said this pattern has a VERY high waist and while at first, I thought that might be a good thing and give me a bit of ‘corset’ action, however, in reality,  I did find it quite uncomfortably restricting so I will be adjusting that later.

Final Verdict: I’m really over the moon with these Byron Lars trousers. I hope the lack of pattern matching won’t upset people too much but I just haven’t gone there yet.  I know the folly of snatching up every pretty pattern you see and never sewing them, but I’m glad that I seem to have chosen a classic that has not suffered from the passing of time (or is it that the style is coming back again?).

I’m so glad I delved into the pattern stash. Which are your favourite patterns that you have never yet made? I’d love to see what patterns people have squirrelled away. Will they ever be transformed into a beautiful me made?

A Typical Blog. A Typical Woman. A Typical Take On Life. With An Atypical Twist!

Discoveries of a Sewcialist